the ferry on our way home :(

I put the work up in the Village Hall on my last day. After fretting that I had not made much progress it is reassuring to see the work laid out and to be able to see that there is something there. Some of the paintings work, the drawings will give me lots to work from, some of the monotypes have worked really well, and others I will use as chine collee in future prints. I have had lots of thoughts in the last week about juxtaposing some of these with new plates and blocks- to explore further the contrasts and similarities between the different surfaces. The quick drawings of the sea give me lots of shapes and colour to work with in some new prints. And I have got Collagraph and Etching plates to bring back to the studio and work on. We had tea and scones and a Monoprinting Workshop. Another summer over! 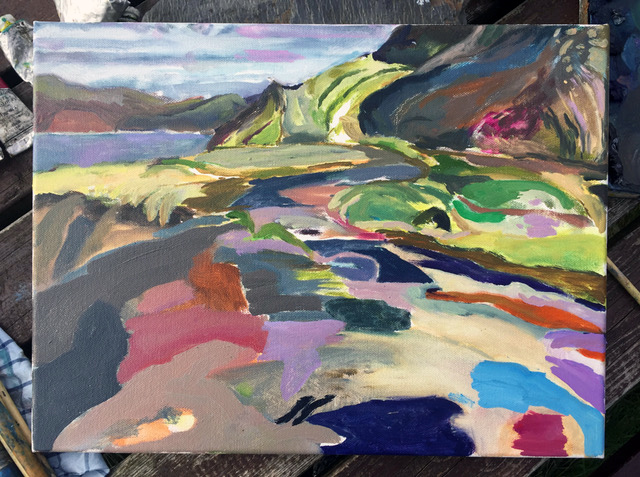 Had a lot of fun in the last few days making Collagraph plates to take back to the studio. The best days have been when I have stayed out all day, really feeling the landscape, being in it. The ‘mobile studio’ is ok (well, apart from the fact that my 50+ year old knees don’t like it!), but I much prefer being outside - I seem to move and make different marks. These are all made on the beach, responding to the tide coming in, working with the splashes and using the sea to contribute to the marks. I’ll see how they print. Some of the marks are, I think, too slight and will not print very well but I can hope, and add to them back in the studio.

Monotype made on the beach of the incoming tide.

Had a fantastic trip over to Belnahua today. An island quarried for slate until the 1st World War when all the men left and there was no-one to work there any more. Look out for s BBC programme about it later in the year. At the height of business 150 people lived in these cottages. It is hard to imagine what their lives were like.

Started this painting yesterday. It rained so that the shape of the puddle has changed. It's now a murky brown surrounded by grey- it was much more purple and blue the day before. Behind the sea is coming in again- ignored by me!

Another etching plate lost to the sea - and found again the next day! I drew the arrow on the rock with wax crayon to show me where the plate had been, and then looked in the same place the next day. In fact it was about 10 metres away but roughly in line with the arrow, just further down the beach as it had been moved down by the receding tide.

I was talking to Graham who lives in the cottage in this painting and he was asking why I like to paint the puddles (he has watched me paint puddles for a long time). Behind me is the beautiful west facing sea- and of course this is great to paint too, but there is something more interesting to me at the moment in painting the bits that people don't generally paint. And, in Scotland you have to embrace the puddles - so it's something about painting what you find, and when it rains a lot the puddles are what you get! Then, in the end, they look like rock pools and I like that also. Graham then said something nice, which was that when it is rough the puddles become sea anyway as it comes right over the top and fills the puddles.

Looking at the tide coming in- trying to record that repeated motion as the wave breaks over the rocks. It is never the same!

Thinking about the Hokusai 'Wave' and how perfectly that captures the white foamy bit of the wave curling up the shore. I wonder why I keep trying? I have been coming to this place for over 30 years, and sitting looking at the sea. And it is still impossible to capture. 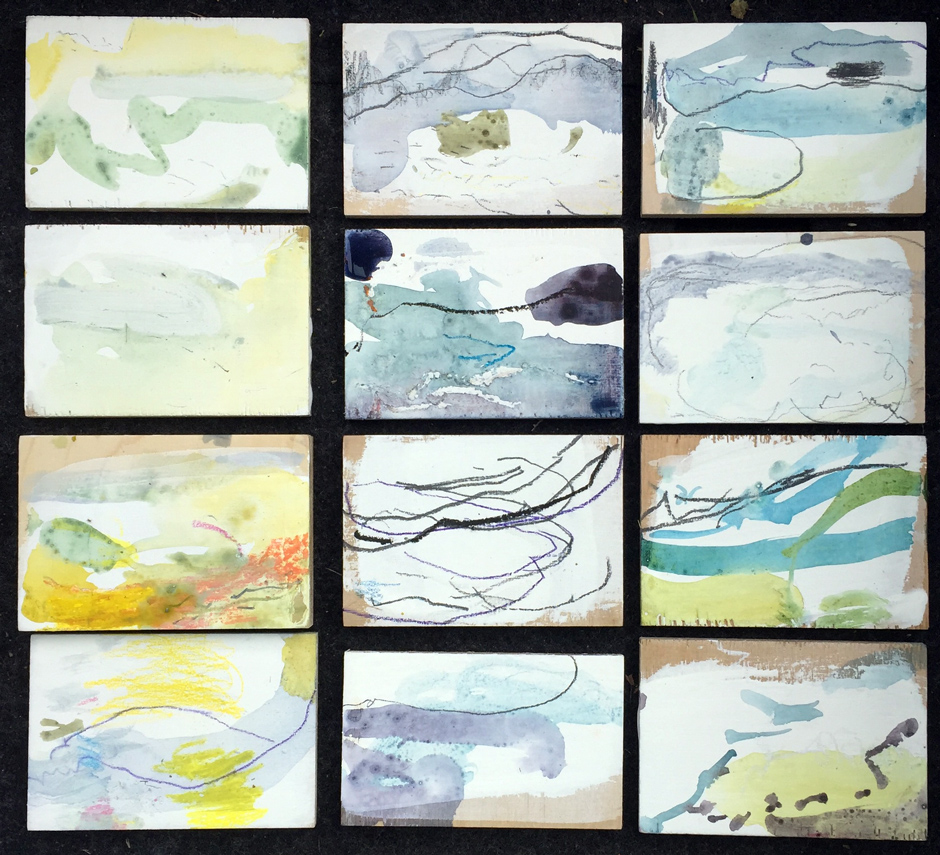 Third evening trying to sort out this painting of the rock pools.

Getting To The Beach

First day on the beach, watching the sea, resting my brain, thinking about the next few weeks and what parts of all of this I will look at, think about, draw on. It has been stormy and the tide has brought up a lot of seaweed. It is just broken pieces, torn up and deposited. It will wash away again or it will dry out. The rain is coming in, the horizon becoming greyer, almost white and losing definition.

I will be posting pictures and stories on this page from the first week in August.